The PPW panel contains a block called "Shadow & Highlight". In it, one finds no less than four actions that somehow enhance shadow and/or highlight detail.

One of them is Photoshop's "Shadows/Highlights" action, run with some fixed and very conservative settings. The others are three variants of so-called Hammers. The term Hammers stems from the notion that the Shadows/Highlights adjustment is not powerful enough: one would need a "bigger hammer". "Bigger Hammer" was the name given to the first of the trio; it is extensively explained in the Modern Photoshop Color Workflow book.

All three have their virtues and flaws. A good comparison, together with recommendations which to use when, can be found in the panel documentation, chapter "The Lesser and Velvet Hammers". I will not repeat it here.

Instead, I will focus on the layer stack for each of the three hammers. What is the function of each layer? What if we want a different effect than what the default gives us? These are the questions that I will try to answer, starting here with the Bigger Hammer.

See figure 1 for the layer stack of the default application of the Bigger Hammer. 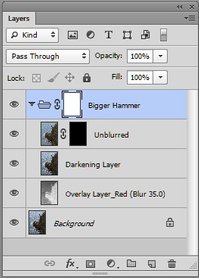 So let's have a look at this bottom layer. To get an idea of its power, open an image in Photoshop, run Bigger Hammer and turn all layers in the Bigger Hammer group except the bottom one off. For many images, this yields a nasty HDR-like look, where everything seems to be oversaturated and with unnatural contrast.

The Overlay layer is a copy of the background layer, inverted, desaturated and blurred, and set to Overlay blend mode. Let's have a look what this means. 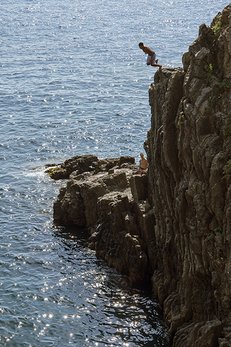 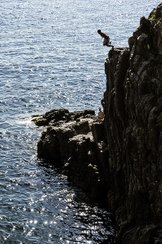 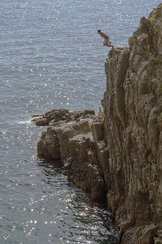 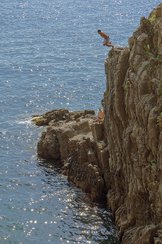 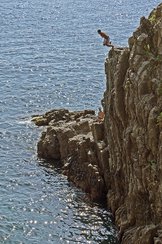 The Overlay blend mode has the effect of lightening where light pixels reside, and darkening where dark pixels reside. Should we overlay a layer by itself, it will increase contrast. See figure 2 how that looks for our original.

Inverting the top layer gives the opposite result: pixels that were originally light get darker, and dark pixels get lighter. See figure 3.

Unfortunately, this action also flattens colors. Overlaying a blue pixel with its inverse moves it towards the opposite color (yellow), which considerably desaturates the result. This is not what we are after, so we desaturate the top layer, which brings back the color (and even strenghtens it). See figure 4.

NB The Bigger Hammer action can use one of the channels instead of the desaturated RGB; in fact, the default is the Red channel, which seems to give the most likely optimal choice. Fair enough - for simplicity sake, I continue with the desaturated RGB.

So now we have a version with darker highlights, lighter shadows and original color. This sounds like what we're after, but not yet so. Local contrast is destroyed as well by this move, resulting in an overly flat image. Try it, and you will see what I mean. Global contrast must be deminished, but local contrast must be kept. A light pixel must get darker if it happens to reside in a light image area. If however it is surrounded by dark pixels, the dark pixels must get lighter but the one light pixel must remain light, thus retaining local contrast. Such effect is accomplished by the blur. Blurring the inverted layer basically divides the image in dark and light areas, as opposed to dark and light pixels. The blur radius determines how big these areas are. See figure 5.

So far so good, but the blur introduces a new disadvantage: it creates halos. Sometimes they are not visible, sometimes they are and in a minority of cases they ruin an image. We'll come back to that later. See figure 6 for this effect in our example image.

By now, after have used the Bigger Hammer many times, I know what these layers mean and accomplish. But I clearly remember my confusion when I first started using them. The Bigger Hammer action darkens light areas, and lightens dark areas. Now here we have a layer called "Darkening Layer" but it does not affect light areas but dark areas. The layer "darkens dark areas", to reduce some of the bottom layer's effect.

So yes, strictly speaking, the layer darkens. But in the context of the bigger hammer, light, lightening, dark and darkening must be clearly distinguished. I suggest to call the layer "Reduce lightening of dark areas". That's what it provides: a reduction of an effect of the base layer, by the percentage of the layer opacity (default: 50%).

As a bonus, the Darkening Layer seems to reduce light halos by roughly the same percentage.

See figures 7 and 8 for the effect of the Darkening Layer. 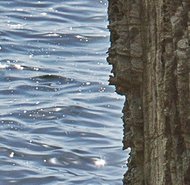 Figure 6. Slight halos along the rock 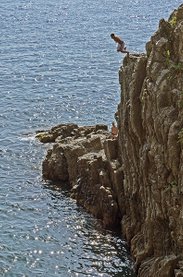 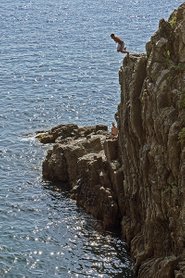 Talking about names, I don't like the name of the bottom layer either. "Overlay Layer_Red (Blur 35.0)", yes that's what it is and it may be useful for later reference, but it makes nothing clear about the purpose of the layer. This is like naming a File - Save action to mention the internal name, sector and indexing technique of the hard disk where your file is stored.

Layer 1 and 2: How they work together

Let's try to understand how the bottom two layers interrelate. The question may be, what if we also want to reduce the darkening of light areas, e.g. to 50% ?

There are two ways to accomplish this. There may be a slight difference between these two options, but in theory they should yield the same result, and I was not able to spot any difference.

The second option may be confusing, but it's how these layers work. Let me give a few more examples.

- Alternatively, follow the scheme of the first option above. Leave Overlay on 100%, set Darkening to 20% and add a Lightening layer on 60%. (Now see, how confusing these Lightening and Darkening names are.)

All this makes me wonder if a different layer scheme would have made matters clearer. Why not:

If you don't know how to accomplish this, read on. On the bottom of this page, I explain how to get this from the default Bigger Hammer layers.

If you are still with me, good. Enough about lightening and darkening. Two layers left, both straightforward.

The third layer is called Unblurred, again an awkward name. Technically, it is an unblur that this layer does, but its purpose is "Reduce halos" - that should be the name. Paint white or grey on the layer mask where you want a halo reduced. I am not very good at painting, so usually fail on this simple instruction. When halos appear, I quickly undo the Bigger Hammer and try one of the other hammers, which appear a lot less prone to haloing.

For the example image, it was not so difficult though. See figure 9. 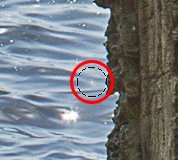 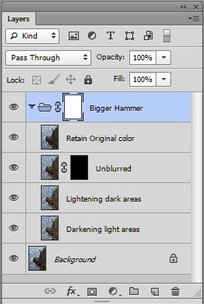 As promised before, I will explain how you can convert the Overlay and Darkening layers to a pair of layers that are much more logical to use. (Note, this doesn't give extra functionality. Whatever can be done with the PPW's Bigger Hammer can also be done with below variant.)

See figure 10 for the layer stack as it looks in the alternative scheme.

The darkening and lightening effects can now be changed each on its own layer, in an intuitive and easy-to-use way. Happy hammering!