The "Picture Postcard Workflow" (often referred to as PPW) is a color correction method devised by Dan Margulis.

For those who want to learn it, there is:

As you may understand, I am enthousiastic about everything related to this Picture Postcard Workflow. It helped me tremendously to become a better retoucher. And furthermore, I spent a lot of time studying, exercising and acquiring the various techniques.

Between October and December 2018 I wrote a series of articles in which I introduce a new color correction workflow that I named "PPW Straight." One could say a simplified PPW, avoiding its complex steps and as a result easier to learn, without compromizing much on quality. I see this as the completion of my writings about the PPW. 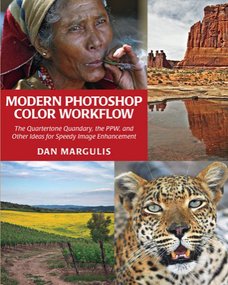 The most difficult step in the PPW? This article explains why, and examines when and why H-K is beneficial in the color correction process.

The Velvet Hammer is weaker than the other hammers, but it is also less prone to artifacts. In this article, I explain how it works.

Two leftovers from the study on contrast: Clarity and Dehaze. Should we invoke them during the raw phase or is there a place for them in the PPW workflow?

How important is working on contrast in the raw processor? It is to a certain extent - and this article explains why.

Picture Postcard Workflow and raw processing: How to treat color?

Theory says: start the PPW with a dull image. In this article, I process two differently colored versions of one image to verify this guideline.

Should we reduce noise during the raw processing phase or much later? Despite the complexity of the subject, I do a brave attempt to answer this question.

A common guideline is to apply some sharpening during the raw processing phase. Is this wise if the picture undergoes a PPW treatment afterwards?

How important is setting proper white balance in the raw processor if step 1 of the PPW removes a color cast anyway?

Multiple readers have asked me about raw processing in combination with the PPW. It's not so simple, and I try to explain why.

A closer look at the action that was introduced in the previous article. It has a few drawbacks that the user should be aware of.

In this article I present a way to get rid of sky halos caused by the Bigger Hammer action. Fully automatic, by means of a Photoshop action.

Channel blending: a simple concept, not so easy in execution. I present some simple strategies that may help to tame this beast.

In this article, I search for something that may be called the central philosophy of the PPW. Interestingly, the MPCW book's introduction contains many hints.

Similarly to what I did for the Bigger Hammer action, I now analyze Lesser Hammer. Again I present an interesting variation.

One year after I wrote my first article in the PPW series, I ask myself if my thoughts about it have changed. In some respects, they have.

I review my own MMM Finetuned action. No matter how wonderful results it can give, It has drawbacks and pitfalls.

Picture Postcard Workflow: Why I don't like the False Profile technique

The technique of false profiling has been in Margulis' toolbox for a long time. To be honest, I don't like it. In this article, I explain why.

My connection with the Picture Postcard Workflow

How did I get so fascinated by the work and ideas of Dan Margulis? Here is an explanation combined with a historical overview.

Bigger Hammer is one of the more powerful actions of the PPW. I analyze how it works, what each layer does, and how you can employ it for optimal results.

Modern Photoshop Color Workflow: A review of the book

Talking about the workflow is one thing - in this article I scrutinize the book that explains it all. Lots of thoughts, and a surprising conclusion.

Picture Postcard Workflow: How to effectively use the MMM action

The MMM action of the PPW is very effective... in some respects too much. I present an action that may be a useful alternative.

Picture Postcard Workflow: Color by the Numbers compared with other methods

The workflow propagates "color correction by the numbers". In this article I compare this method to various other methods. Which one works best?

Doing a Color Boost in LAB gives a better result than using the Saturation slider in RGB. Or does it?

The PPW book seems not very clear about how to set proper highlights. In this article I propose a slightly more precise instruction.

What is the Picture Postcard Workflow and what are my experiences with it? I go through one example image and quickly explain the steps of the workflow.