The reason for these later additions is that Bigger Hammer sometimes causes unwelcome artifacts, in particular halos. Users requested a version that was less prone to such side-effects. The first variant Lesser Hammer does a good job in this respect, although some haloing still turns up occasionally. The third alternative, Velvet Hammer, almost completely avoids halos. The downside of this success is that Velvet Hammer is the weakest of the three.

I spent four earlier articles about the hammers. One explaining how Bigger Hammer works, one about Lesser Hammer, and two laying out a method to reduce the halos that Bigger Hammer causes. Given the above, I am very curious how the third specimen succeeds in so successfully avoiding halos. Some more subtle blurring mechanism must be in place…

It’s now time to take a look under the hood of this third hammer. 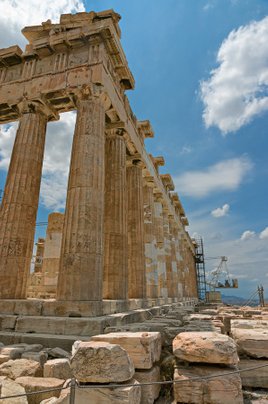 Before I continue, let me quickly resume the story of the hammers. Simply said, the Hammer actions enhance detail in light and dark image areas by darkening highlights and lightening shadows. But this must not be done on pixel level, or all texture is crushed and we are left with a very flat result. Instead of acting upon pixels, we need to affect image areas. The correct course of action is to darken light areas, even if they contain single dark pixels – and similar for dark areas. This is accomplished by blurring the layer that does the main work. And guess what, it’s the blurring that sometimes causes halos. 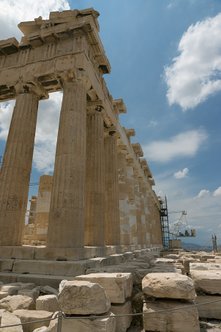 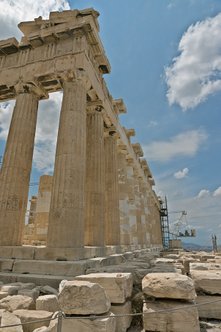 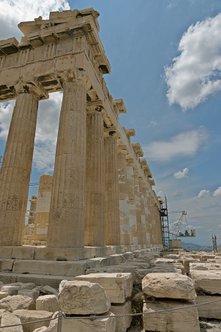 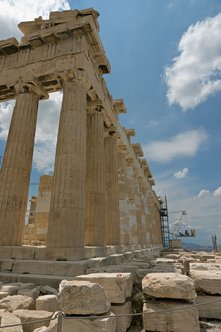 Figure 1. From left to right: original and Bigger, Lesser and Velvet Hammer applied

See figure 1 for an original image plus the result of each of the hammers applied. Halos are most visible along the top of the temple and around the cloud top right.

In my articles about Bigger Hammer and Lesser Hammer I explained the ins and outs of the blurring. In short:

Now the question is, how does Velvet Hammer compare to these? 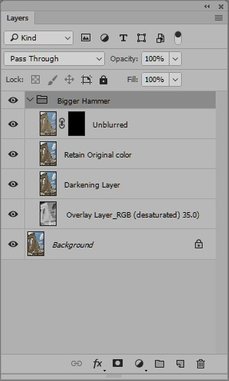 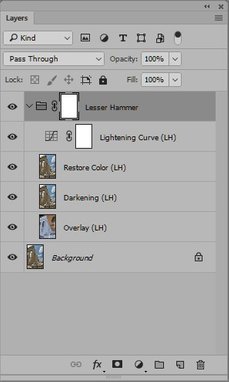 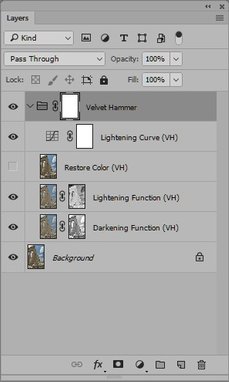 In the Action panel, Bigger Hammer counts 18 steps. Lesser Hammer 22. Velvet Hammer is by far the longest action with 34 steps. The good thing about these actions is that everyone can read them and replay all steps. You won’t be surprised when I tell you that I did exactly that. This is what surprised me: Velvet Hammer uses exactly the same blurring mechanism as Lesser Hammer. No special trickery at all. The action is longer than Lesser Hammer because it does a few more things at the end. Basically, it tones down what Lesser Hammer does, produces a different layering structure and that’s about it. The blurring mechanism of both actions is identical.

Below, I will briefly explain the “few more things” that Velvet Hammer does in comparison to Lesser Hammer. And to nicely finish off the Hammer series, I will show how Velvet and Lesser Hammer can be brought together until they are the same – as an evidence that they are in fact based on one and the same Overlay/Blur mechanism.

I won’t explain again how Lesser Hammer works. See my article about it for an explanation. The core function of Lesser Hammer can be found in a layer called “Overlay”. The Velvet Hammer action, about halfway, arrives at the same Overlay layer. See figure 3 for what the layer structure is at that point, and figure 4 for the how the image then looks. Note the similarities with the Lesser Hammer layers and final result. 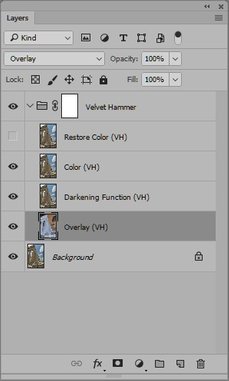 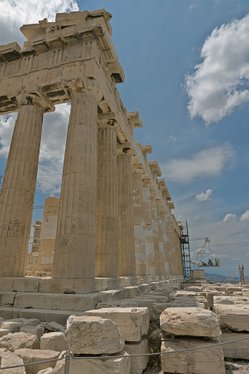 Now let’s look at what happens in the Velvet Hammer action from this point on.

That’s it. Considering the resulting layer structure, the main difference between the two actions is that only Velvet Hammer separates the darkening from the lightening part. That’s a major advantage in my opinion, because it provides an intuitive interface to manipulate darks and lights each on their own layer. Neither Bigger nor Lesser Hammer have this.

The rest of this article is a short tutorial that proves my point that Lesser and Velvet Hammer are based on the same overlay/blur mechanism. It won’t help you any further in enhancing your images, but it may provide better understanding of what goes on in these actions. 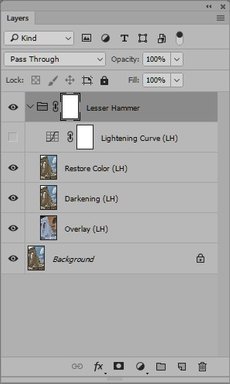 Figure 5 shows the resulting layer structures of P1 and P2. By now both files are identical. If you still have doubts, flatten P1, put a copy of it above P2 in Difference mode. The result will be pitch black.

As far as I know, a procedure like the above is not possible to connect Bigger Hammer and Lesser Hammer, except (of course) by completely rebuilding the Overlay layer. Bigger Hammer is based on an entirely different (and much simpler) blurring algorithm.

Some quibbling about the Velvet Hammer.

- gives a similar result as Velvet Hammer without its Lightening Curve layer.

Or alternatively, Shadows/Highlights with above values plus a Lightening Curve like VH’s, is pretty close to the default Velvet Hammer result.

See figure 6 for a comparison. 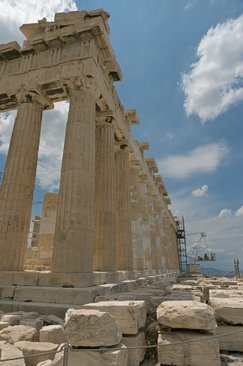 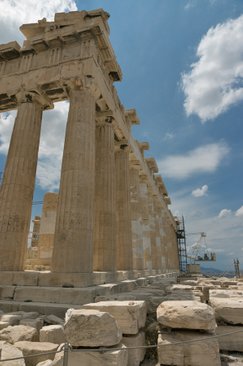 Right: Shadows/Highlights with values as given in the text.

This ends my analysis of the three hammers. Mastering this part of the PPW is not easy, given the amount of choices in actions, layers, opacities and whatnot. Yet, it’s as essential as highlight and shadow detail is in your image. I hope I helped you to understand how the hammers work, what they can do for your image, and how to best invoke them.