Before I dive in, let me recap the basic layer structure. From bottom to top, the following layers are created by the Lesser Hammer action: 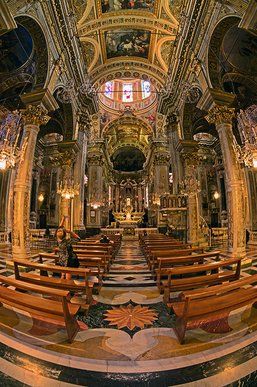 One doesn't need much imagination to see the similarities with the Bigger Hammer layer structure. The Overlay, Darkening and Restore Color are common. Bigger Hammer needs an Unblur to reduce the halos, Lesser Hammer adds a Lightening Curve that reduces the flattening effect. This gives us a clue about the main difference between the two. Bigger Hammer keeps excellent local contrast but is prone to halos, Lesser Hammer doesn't suffer halos so much but gives flatter results. The difference is caused by a different way of blurring.

Blurring? Well, yes. Let me first explain why we have to blur in this process.

Remember, the Overlay layer in Bigger Hammer is constructed by copying the Background layer (or any of its channels), invert, blur, desaturate and set to Overlay mode. Without the blur, this procedure would give a very flat result. All contrast would be diminished: dark areas get lighter, light areas get darker (that's good) but this happens on a micro-level too. Small contrast is destroyed. To prevent this, we have to blur: this recovers local contrast.

However... a simple gaussian blur has a nasty side effect of causing halos. This happens in the Bigger Hammer action. To prevent such halos we have to blur differently. The Lesser and Velvet Hammers aim at exactly that. 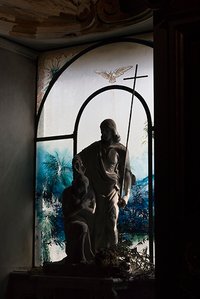 The story of a blur

So let's see how the blurring works for the Lesser Hammer. We follow an example image, see figure 1 for the original.

Contrary to the Bigger Hammer, the Lesser Hammer starts with a Smart Blur. Smart Blur is considerably different from Gaussian Blur, the deviation being that it tries to keep sharp edges, while blurring everything else. How sharp a "sharp edge" must be is determined by the filter's threshold parameter. See figure 2 and 3 for the effect of Smart Blur and Gaussian Blur respectively. Figure 4 shows fragments of both. The difference is, well, significant. 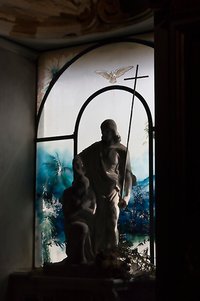 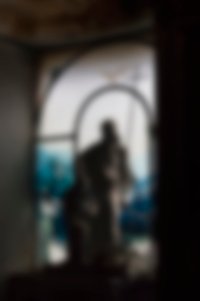 Figure 4. Fragments of both

So, starting from the Background layer, we copy and run Smart Blur, radius 35, threshold 75. An interesting experiment could be, now that we have a blurred version that seems to avoid halos - what if we follow the rest of the procedure of Bigger Hammer? We invert, desaturate and overlay this layer.

Sure, why not. The result is figure 5. For comparison, I repeated the process but with Gaussian instead of Smart Blur (i.e. the basis for Bigger Hammer) and put the result next to it, see figure 6. 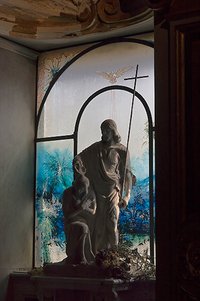 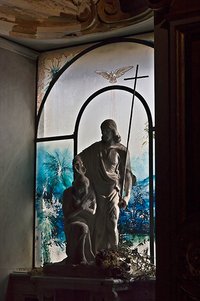 The difference is striking. The Gaussian Blur version does a much better job in retaining local contrast. Apparently the Smart Blur is not as good as we thought. Also, Smart Blur can introduce nasty artifacts. See figure 7 for what happens on the left arm of the statue. We clearly need some more blurring.

Lesser Hammer does this by cleverly mixing the Overlay layer that we just created with a more or less "normal" Gaussian Blur. It mixes - here comes the technical part - 50% dark halos of a 20-pixel blurred version and 65% light halos of a 40-pixel blurred version. Without going into much detail of this, all I can say is: dark halos will become light halos when we invert the layer. Light halos are more obtrusive than dark halos, so better keep them smaller (20 pixels) and less strong (50%). The light halos will become dark after inverting; we can afford a larger radius (40 pixels) and a stronger effect (65%). The actual figures are not so important but the idea should be clear.

Whatever, we follow this procedure and arrive at a layer that looks like figure 8. Invert, desaturate and overlay gives us figure 9. For comparison: figure 10 is the same as figure 5, the version before the Gaussian blur part. 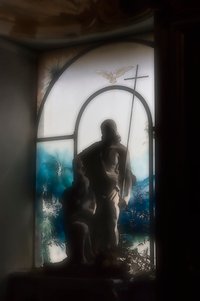 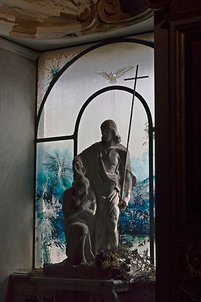 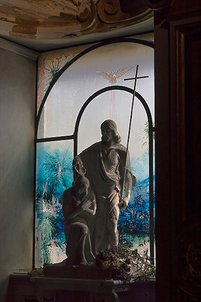 Figure 9 is definitely better than figure 10 in terms of local contrast. The whole extra blur step is some sort of a compromise: too much extra blur and visible halos would reappear, not enough and we are left with a flat result.

To color or not to color?

Hoping you are still with me, I have a surprise for you. The Overlay layer of Lesser Hammer doesn't desaturate. It leaves the colors in - for reasons that I am not really sure about. Note that an inverted not desaturated layer in Overlay mode neutralizes colors considerably. Later, the action adds a "Restore Color" layer, but limited to 70%. As a consequence, colors are always slightly toned down. This helps to increase detail in strongly colored image areas - something the panel documentation rightly emphasizes.

NB Bigger Hammer is quite the opposite. Its Overlay layer is a grayscale, and its Restore Color layer is optional. By default, BH *strengthens* colors, which helps to enhance very light areas.

This is basically it, the other layers are there to reduce the effects of the first layer. 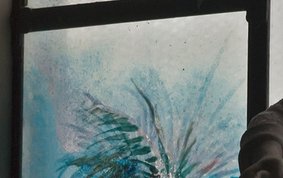 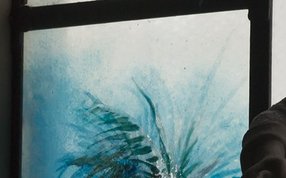 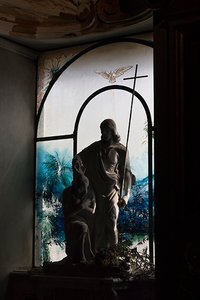 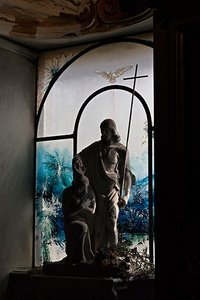 An interesting thought is the following. Imagine for some image we are not interested in enhancing dark areas, only light areas need better detail. We'd have to change opacity of the Darkening layer to 100% to get what we want. Yet, there is the Lightening Curve layer that tries to increase contrast in both light and dark areas. The net result is a darkening of the shadows, presumably undesired.

When that happens, and you want to keep the Lightening/Contrast correction for the highlights, proceed as follows:

That's it. Dark areas protected from the recovered contrast. This time, there is no need to blur the layer mask.

For the opposite situation - better shadows desired but leave highlights unaffected, a very rare situation - do the following: 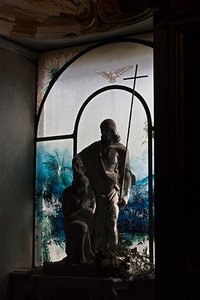 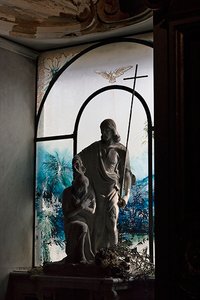