To those who own Dan Margulis' Modern Photoshop Color Workflow book, I suggest to pick it up now and read the introduction. Yes, you heard that right, I mean it: read (or reread) the introduction.

You know, rereading parts of that book is a good advice anyway for whoever is interested in the material. There is so much useful information that you easily miss something at the first read. But my guess is that for rereading, you will be primarily interested in chapters that explain specific workflow steps. Searching for an effective channel blend, you page through chapter 4 for hints.

Well, I can tell you, I did so not long ago and was astonished by the amount of information in it. Lots of essential characteristics of the PPW are laid out. Do you want a quick primer of the PPW, read chapter 1. Do you want an overview of the philosophy, context and history, plus a description of the beta reading process and a bunch of example images - original and processed - read the introduction. It's a wonderful piece of text that is worth rereading just as much as all other chapters. 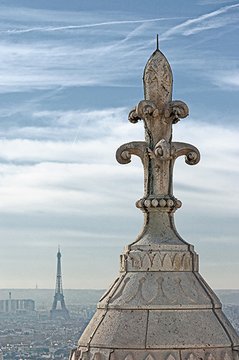 NB For those who don't own the book, there is a surprise: the introduction is available for free on the following webpage: http://www.moderncolorworkflow.com/the-book - just click on the "Introduction" picture on the top right of that page. And yes, it's fully legal. This is the official site about the book and the workflow.

The introduction as listed in the Table of Contents

Searching for a philosophy

In the current article, I will try to say something about the "philosophy" of the PPW. Let me say beforehand that I am not a philosopher by any means. So I will start to just list a few general properties of the workflow, all taken from the book's introduction. I will then see if I can categorize them somehow, and then hopefully distill something that may be called a "philosophy".

Of these six bullets, it seems that three (1, 3 and 4) describe some general properties of the workflow. They are incorporated in the PPW steps and actions, so anyone following the PPW will apply them automatically. All are frequently emphasized in the book. Whether we'd call them philosophy or not, they are certainly important to understand the workflow.

The other three (2, 5 and 6) tell the retoucher how to employ the workflow for optimal results. I would call them 'meta-instructions', not single steps but recommendations about how to execute the steps. As such, I am more inclined to see them as part of a workflow philosophy. Interestingly, Margulis himself writes this in the book's introduction: "The PPW philosophy is that they don't do enough to warrant the additional time to execute them." Yep, that's item 5 in my list above. 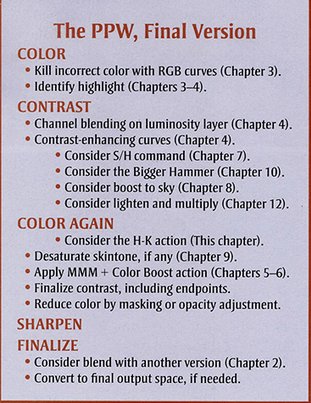 Overview of the PPW steps

Looking over the above list, one may notice another connecting element. Of the six items, I believe as many as five are more or less related to a short, one-word characterization of the PPW. That word is: "volatile". Read the introduction (I told you to do that!), it's written there on the third page: "The PPW is volatile." I am pretty sure I overlooked this little sentence on my first read, but it is probably the central and most important philosophical aspect of the PPW.

This notion of volatility is most explicitly expressed in items 3 and 4 above.

The combination of these two things - freedom of choice and speed - is the key to understanding why the volatility aspect is so important. Let me explain. Enhancing a photo is fundamentally different from, say, solving a quadratic equation. In mathematics, one knows when the problem has been solved. For an image, the contrary is true. One never knows when an image is at its best. The difficulty with image retouching - Margulis warns for this often enough - is that one is easily satisfied because any enhanced version looks so much better than the original. Not right: it always pays off to make another version, because any next version may exhibit some weakness of a previous attempt, a weakness that could otherwise remain unnoticed.

The volatility of the PPW supports this idea. Making two or more versions is worth the time because every run is fast. Plus, there is so much freedom of choice that multiple versions may indeed differ considerably.

Now it is not difficult to see how the other items above are related to this notion of volatility.

Only #1 - the separation of color and contrast - is, to the best of my understanding, unrelated with the notion of volatility. 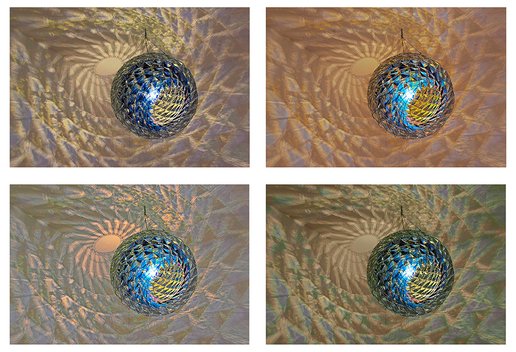 Four versions of one image

Margulis time and again emphasizes the importance of the volatility aspect of the PPW, and especially the idea of merging different versions. In the Modern Photoshop Color Workflow book, he addresses it first (and briefly) in the introduction. He elaborates the idea in chapter 1 (pages 17-20). And he goes through a complete example in chapter 2, working on eight (!) versions of one photo.

Whatever PPW philosophies one can come up with, the volatility aspect is no doubt the most important one. The PPW is more than just a checklist: it also defines how a retoucher should approach an image.

I conclude with a small citation from the book's introduction. Towards the end, Margulis writes:

"... this book is different from others on similar topics. For one thing, it's wide-ranging. In principle it's about a specific workflow but you may find that the most valuable sections have nothing to do with it and are concepts only."