A retoucher who brings a photo from the raw processor into Photoshop, needs to make a small but important choice. A careless user may not be aware of this, and effectively let the software make the decision. Many professionals on the other hand seem to find it of essential importance to pick the right option. Nevertheless, neither Adobe’s raw processors – Camera Raw and Lightroom – nor Photoshop itself ask the user explicitly. They pick the setting that the user is supposed to have defined beforehand. And if that has not happened, the factory default is used.

I am referring to the so-called bit depth – the possible options for which are 8-bit and 16-bit. Go ahead, open a raw file, do any processing and open the image in Photoshop. (In ACR: “Open Image”, in Lightroom: “Edit in… Adobe Photoshop…”) There is no popup asking you whether you want further edits to take place in 8-bit or 16-bit. It’s a preference, set once and used thereafter. 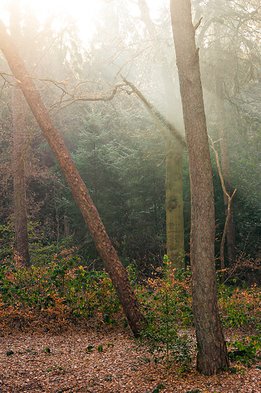 Before I dive into the specifics of 8-bit and 16-bit, let me show you the workflow for choosing either. 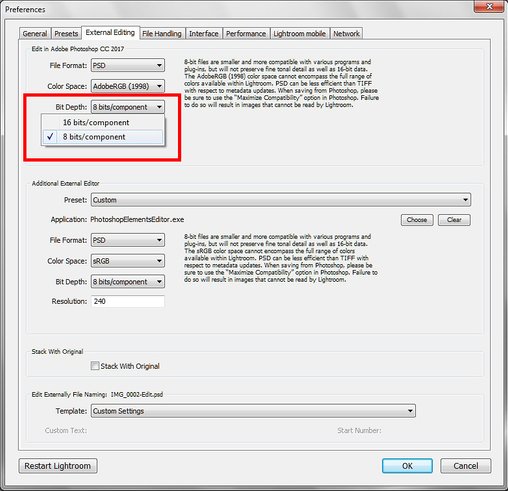 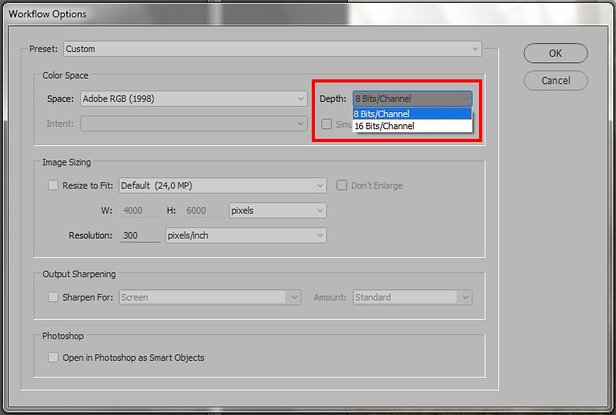 Also, one can explicitly change the bit depth during editing in Photoshop itself. Go to the menu and Image – Mode – X Bits/Channel. In that case, even a third option presents itself: 32-bit, which is out of scope for the current article. An obvious moment of conversion is at the very end of the process, if a JPEG output file is required: JPEG is 8-bit by definition. Yet, the unwary can happily save a 16-bit image as a JPEG because Photoshop, helpful as always, will do the conversion automatically.

In this article, I will explain what 8-bit and 16-bit mean, and how the extra 8 bits in the 16-bit way of coding are used. A next article will explore how bit depth impacts the editing process.

Now for some reason a unit of 8 bits (usually called a byte) happens to be very common in computer architectures. So there we are, the slightly confusing but very standard concept in the world of digital imaging: 8-bit images.

Confusing – because obviously, not the whole image is coded in just 8 bits (if it were, only 256 different images would be possible). Not even one pixel fits in 8 bits (if it would, only 256 different colors would be possible). No – 8 bits are reserved for each color component. In an 8-bit RGB image, each pixel can have 256 possible values for the red component, 256 for the green and 256 for the blue. That’s the story of 8-bit. Every pixel needs, well, 24 bits to store its color information. But never call this way of coding 24-bit or people will surely misunderstand you. It’s just always called 8-bit. Figure 4 shows how these three 8-bit entities make up one color.

8-bit by the numbers

Now that we have that clear, let’s move on to the next question. Given this 8-bit schema, how many colors are possible? That’s simple arithmetic, assuming three components of RGB: 256 x 256 x 256, which is about 16.7 million colors. Every combination yields a different color, so we really can code 16.7 different colors in 8-bit RGB.

As an aside: what about CMYK and LAB?

For the sake of simplicity, let’s restrict ourselves to RGB in the remainder of this article.

Right, so in 8-bit RGB, 16.7 million possible colors exist. This may seem a phenomenal figure, but how big is it really? How many different colors can a human with good vision actually distinguish? Do a google search, and you will find figures that roughly vary between 1 million and 10 million. Also a lot, but still less than the 16.7 million colors of the 8-bit RGB. Eight bits of color coding are more than sufficient then, are they?

Well, it's not so simple.

16-bit by the numbers

The arithmetic for 16-bit is very similar to that of 8-bit, except for one surprise. One would assume it’s 16 bits per color component this time (we restrict ourselves to RGB again). But no: for some reason that I have not been able to find out, only 15 bits are used. This means, over 32,000 different values per R, G and B are possible, yielding 35 trillion possible colors. A stupid amount, right? A huge waste of memory and disk space! Or…?

Despite this enormous figure, many websites and Photoshop books tell you that working in 16-bit is better than working in 8-bit, for quality reasons. Let me try to analyze the difference between the two then.

The figure shows the granularity of 8-bit coding on the dark blue line. Note how far single steps seem to lie apart. The (light blue) 16-bit scale is much finer.

So what can we see here? The extra bits are used to fill up the spaces between two consecutive 8-bit values – there is nothing extra at the very ends. 16-bit coding does not give extra dynamic range. The lightest highlight in 8-bit is the same as it is in 16-bit, and similarly for the darkest shadow. This is an important notion, and often forgotten or neglected in explanations.

For those familiar with the properties of raw image files, this may be a disappointing fact. (It was for me when I first realized this.) In raw, more dynamic range is available than what can be made visible on a screen. That extra range is “hidden” in extra image bits and can be recovered by the raw processor. See figure 6 for an example. Both images were developed from one raw file, one with exposure -2, one with +2. 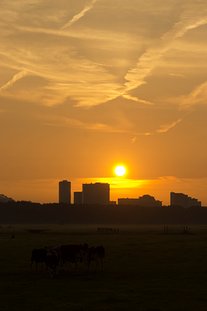 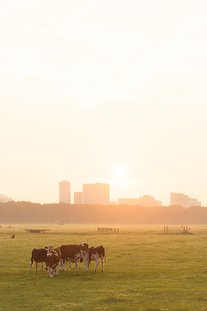 Notice the detail in each version that is practically invisible in the other. All information is there, captured in "extra bits" that a processed image, even in 16-bit, cannot provide. Right when we open an image in Photoshop proper, the dynamic range is fixed, limited, for 16-bit as well as for 8-bit coding. This is true no matter what the original raw file may have contained.

The question remains, which of the two should we use for editing, 8-bit or 16-bit? I put off that question to a future article. Don’t expect a definite answer though, I prefer to indicate advantages and disadvantages, and leave the actual choice to you.

For some imaging needs, 16 bits per channel are not enough. 32-bit color coding has enormous potential in terms of dynamic range.

This article not only shows how to construct a 32-bit image file from multiple exposures, but also how to convert it back to 8-bit.